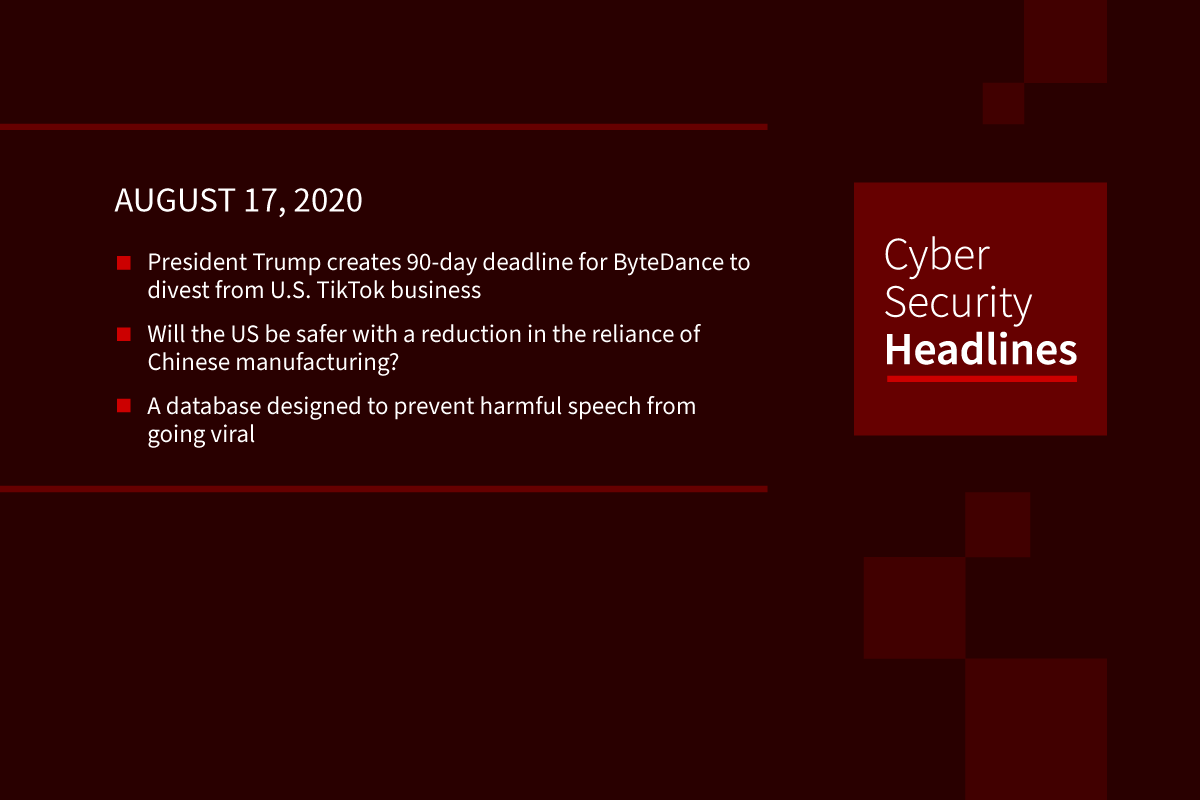 Under Trump’s latest order, Chinese-owned company TikTok must also destroy all U.S. user data. In the order, Trump said, ““There is credible evidence that leads me to believe that ByteDance … might take action that threatens to impair the national security of the United States.” This order buys more time for ByteDance to sort out a deal to operate in the U.S. The previous order was only 45 days.

Will the US be safer with a reduction in the reliance of Chinese manufacturing?

A story on FP, aka Foreign Policy, points out that as the US deidustrializes looking to China to manage more of its manufacturing, it puts the US in a vulnerable position of coercion, espionage, and foreign interference. Since March, China has already proven that it can and will control supply chains and information.

A database designed to prevent harmful speech from going viral

The Global Internet Forum to Counter Terrorism is a largely unknown, yet valuable, database established in 2017 by Microsoft, Facebook, Twitter, and YouTube. When shootings and other damaging content are recorded and passed around social media, they are flagged and their digital hashes or fingerprints are passed through this database to alert other social networks to remove the harmful content.

The class action suit announced by the UK and the Netherlands focuses around mass tracking of real-time bidding auctions which is arguably not compatible with strict EU laws around consent and personal data.

The GRU, Russia’s Main Intelligence Directorate, was using a hacking tool code named “Drovorub” to break into Linux-based computers. Touted as a hacker’s “Swiss Army knife” it had many functions that allowed for stealing of files and remotely controlling a victim’s computer.

An opinion piece in the New York Times, claims that the recommendation systems within social media sites that prioritize content with high engagement is what allowed groups fraught with conspiracy theories, like QAnon, to go mainstream. The once underground posts are now going viral. These high-ranking posts make it to the social news feeds of politicians who after seeing all the engagement think it’s of great importance and repeat it to the mainstream media.

To help users more easily spot when they are and are not being phished, Google will highlight all parts of a web address, except the domain name. Google wonders if this small alteration will help users be more aware that they’re at a valid site before they start entering personal information. The new test will begin only on the desktop version of Chrome.

If everyone’s got a different feed, what’s the value of threat intelligence?

Researchers from universities in Netherlands and Germany are realizing that commercial and open source threat intelligence feeds don’t seem to be collecting the same data, even when they’re tracking the same advanced persistent threat groups. Comparing two commercial vendors, the researchers found at most a four percent overlap in threat indicators.