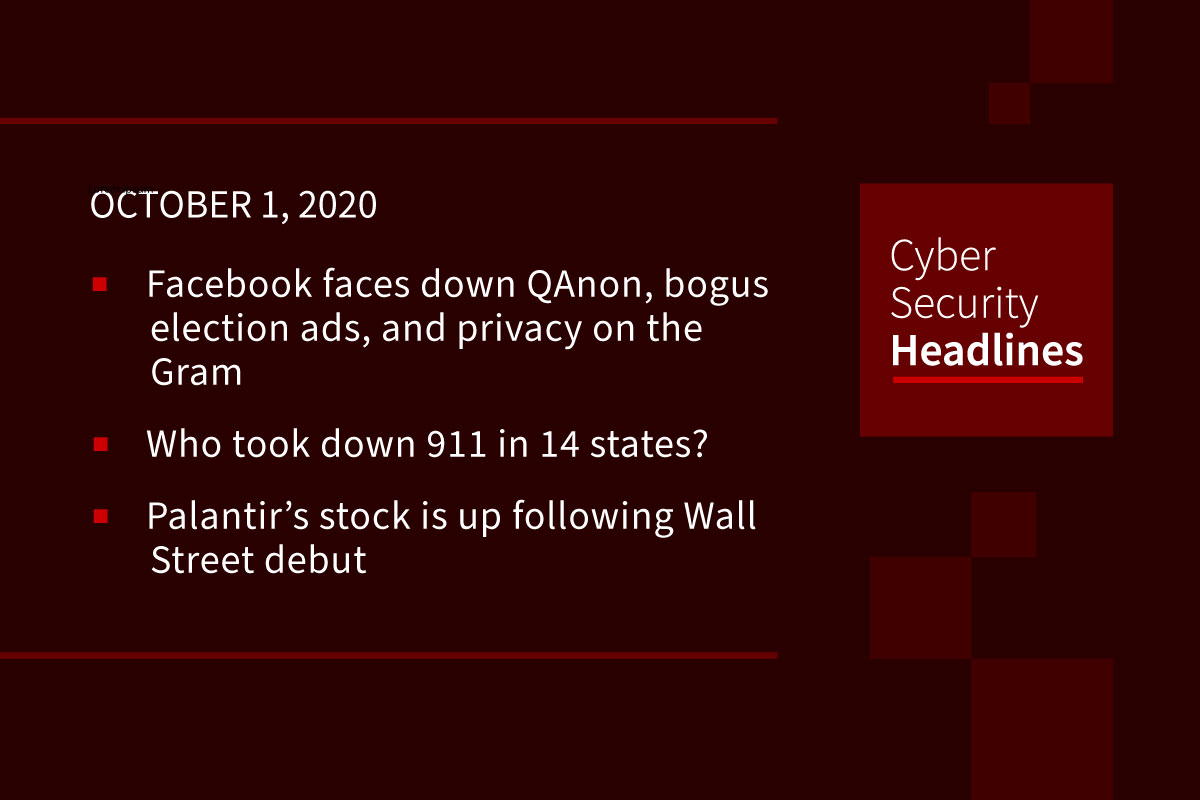 Since Facebook announced in August that it would crack down on posts by fringe conspiracy theorists, the social network has removed 6,500 pages and groups associated with QAnon and militia-affiliated organizations. In a separate announcement, Facebook said that it will ban ads on Facebook and Instagram that promote delegitimizing the U.S. election on November 3. The company also announced new privacy settings for Facebook Messenger and Instagram direct messages, part of its plan to integrate the two services.

Residents in towns and cities across 14 states could not reach their 911 emergency services on Monday. But who’s to blame for the outage? While initial reports blamed the outage on Microsoft Azure Web services, other sources have blamed technical errors at Intrado and Lumen, two companies which manage 911 calls for much of the U.S.

Palantir, the secretive data company co-founded by early Facebook investor Peter Thiel, closed its first day on Wall Street at $9.50, up 31 percent over its reference price but $4 billion below its private market valuation. Palantir, which says it wants to become “the default operating system for data across the U.S. government,” has been criticized for contracts with ICE and other law enforcement agencies.

Microsoft: Ransomware and nation-state attacks on rise, harder to stop

Phishing is the new… well, phishing. Malware is out, credential stuffing and business email hacks are in, reports Microsoft in its latest analysis on rising threats. Attackers are targeting more third-party vendors, as they become more sophisticated, says the company’s annual Digital Defense Report published on Tuesday.

Will the EU block Chrome from Android?

In the near future, you might not get Safari on Apple’s iPhones. Or Google Search on Android devices – at least in the EU. New regulations planned by the European Union could stop tech companies from giving their own services preferential treatment, including exclusively pre-installing their own apps. They also could be forced to share consumer data with business rivals, according to proposed rules under the EU’s Digital Services Act.

Anthem coughs up another $39.5 million penalty over 2015 breach

While U.S. authorities blamed a 2015 data breach of health insurer Anthem on a Chinese hacker, the company has been found liable for the fallout. The insurer has agreed to pay $39.5 million in penalties and fees as part of a settlement covering more than 40 states. Anthem must also implement penetration testing, and log and monitor its networks.

GitHub will now scan for vulnerabilities

Wyden to DHS: Are foreign-controlled browser extensions a threat?

Browser extensions could be the next geopolitical cybersecurity battlefield, says U.S. Senator Ron Wyden, D-Ore. He’s asked the Department of Homeland Security’s cybersecurity team to evaluate what kind of threat, if any, browser extensions made in countries known to conduct espionage against the US poses to the country.(Ars Technica)

Next article Defense in Depth: Legal Protection for CISOs