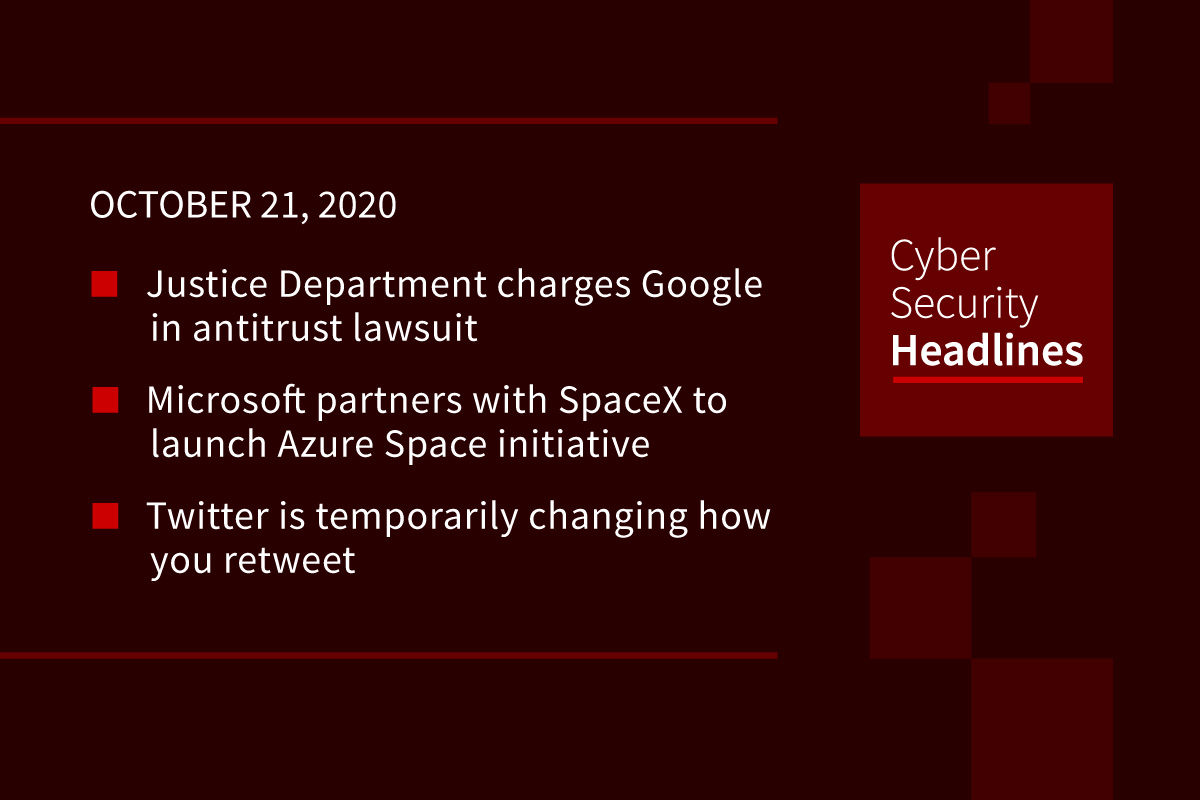 The suit alleges that Google uses anti competitive tactics to preserve a monopoly for its flagship search engine and related advertising business, maintaining its status as gatekeeper to the internet through an unlawful web of exclusionary and interlocking business agreements that shut out competitors, including paying smartphone manufacturers to maintain Google as their preset, default search engine. Google’s chief legal officer responded by stating the lawsuit was deeply flawed. “People use Google because they choose to—not because they’re forced to or because they can’t find alternatives.”

As a competitor to the internet satellite program being launched by AWS, Azure Space is a set of products and partnerships designed for companies in the public and private sectors as well as customers in the agriculture, energy, telecommunications, and government markets, as well as any customer with remote-access and bandwidth needs. In addition to serving terrestrial customers, Microsoft also announced Azure Orbital, which provides satellite operators with access to physical satellite communications capabilities, and Azure Orbital Emulator, which conducts massive satellite constellation simulations.

To help prevent abuse and the spread of misinformation up to and including election week, Twitter has reconfigured its retweet button to automatically pull up the “Quote Tweet” feature instead. Twitter explains the change as being done is the hope of introducing some friction into the process, forcing people to consider what they are retweeting or take the opportunity to add their own perspective, rather than simply amplifying other people’s tweets. The change will be in place until at least November 6.

The operators of Darkside ransomware have donated some of the money they made extorting victims to the non-profits Children International and The Water Project. Darkside emerged on the ransomware scene in August this year, targeting corporate networks and asking between $200,000 and $2 million for the file decryption key. Darkside used a cryptocurrency mixing service to hide their donation trail. It is unlikely that the charities will accept the money since it resulted from criminal activities.

The 2.54 Tbps attack happened in 2017and according to its Threat Analysis Group the attack was carried out by a state-sponsored threat actor, operating through Chinese internet service providers. The attacker used several networks to spoof 167 millions of packets per second to 180,000 exposed servers, and was four times larger than the Mirai botnet of 2016. Google TAG team wanted to raise awareness to an increasing trend DDoS attacks, especially by nation states.

Sites belonging to 8chan and QAnon which were connected to the Web by VanwaTech an ISP in Vancouver, Washington, found themselves temporarily out of action following a call to VanwaTech’s own DDoS protection service, CNServers LLC, based in Oregon. CNServers told its own customer, Spartan Host Ltd., registered in Belfast, Northern Ireland — that it would no longer provide DDoS protection for the 254 Internet addresses that Spartan Host was routing on behalf of VanwaTech. After being dropped by Spartan, VanwaTech’s IP addresses were routed to a DDoS protector in St Petersburg, Russia. Security researcher Ron Guillmette told Krebs on Security this type of masking is known in the business as private-peering.

Adblocking extensions with more than 300,000 active users have been surreptitiously uploading user browsing data and tampering with users’ social media accounts after having been sold to new owner. Rights to Nano Adblocker and Nano Defender which often are installed together, have about 300,000 installations total were sold by their developers. Shortly afterwards it was revealed that the new developers had rolled out updates that added malicious code, specifically tagging Instagram sites with unauthorized likes, and accessing unauthorized websites.

After posting a paper comparing its products to its competitors, Los Angeles based Orca Security found itself the recipient of cease and desist letter from Palo Alto Networks demanding that the comparison be taken down on the grounds of illegally publishing reviews or benchmarks of Palo Alto products without explicit consent. In a statement posted on the Orca Security website, CEO Avi Shua stated that cybersecurity community deserves transparency and that and vendors shouldn’t be allowed to prevent publishing reviews or benchmarks via legal threats.

Previous article Can a Robot Be Concerned About Your Privacy?