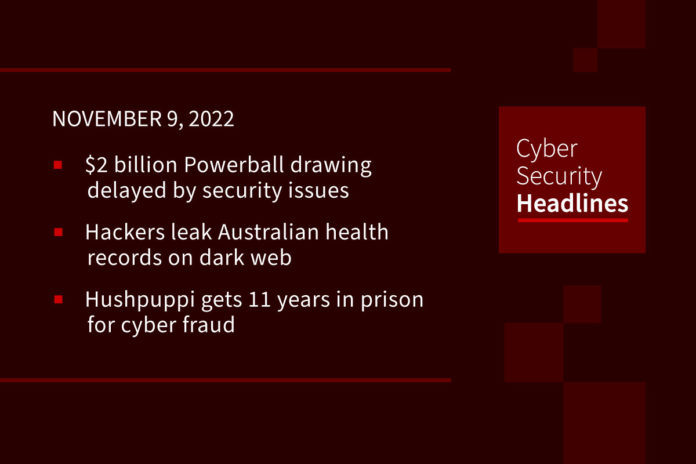 The record-breaking $2.04 billion Powerball run ended Tuesday after an hours-long delay at the hands of a security issue. The drawing was initially set for Monday but was paused for nearly 10 hours by the Multi-State Lottery Association after the Minnesota Lottery failed to submit required data (such as lottery ticket sales metrics). The drawing commenced on Tuesday morning, and lottery officials confirmed a single victor from Los Angeles County who will take home the world’s largest ever lottery jackpot. A Powerball spokeswoman said, “The delay was necessary to confirm the Powerball drawing could be conducted securely and accurately” but some are now questioning the integrity of the drawing process.

Earlier this morning, hackers began leaking sensitive medical records stolen from Medibank, an Australian health insurer with nearly 10 million customers, after the firm refused to pay a ransom. The data leaked anonymously on the dark web includes names, birth dates, passport numbers and information on medical claims for hundreds of customers. The hackers also separated victim data into a “naughty” and “nice” list with some on the “naughty” list having codes linking them to drug addiction, alcohol abuse and HIV. Among the victims is Prime Minister Anthony Albanese, himself a Medibank customer, who said the attack was a “wake-up call” for corporate Australia. As Medibank scrambles to contain the leak, it is also staring down the barrel of a potentially-costly class action lawsuit.

Hushpuppi gets 11 years in prison for cyber fraud

An Instagram influencer known as ‘Hushpuppi’ has been sentenced to 11 years in prison for conspiring to launder millions of dollars through business email compromise (BEC) scams and other cyber schemes. Forty-year-old Nigerian, Ramon Olorunwa Abbas, admitted to conspiring to launder over $300 million between 2019 and 2022. The U.S. Department of Justice (DoJ) ordered Abbas to pay restitution of $1,732,841 to two confirmed victims, a law firm in the U.S. and a businessperson in Qatar. Abbas used proceeds from his scams to show off a lavish lifestyle on Instagram, gaining him influencer status.

A new Chromium browser botnet named ‘Cloud9’ has been discovered in the wild using browser extensions to steal online accounts, log keystrokes, inject ads and malicious JS code, and enlist the victim’s browser in DDoS attacks. Cloud9 has also been spotted loading exploits for known vulnerabilities for other browsers including Firefox, Internet Explorer, and Edge. The malicious extension isn’t available on the Chrome web store but is being circulated through alternative channels, like websites pushing fake Adobe Flash Player updates. Researchers at Zimperium have seen Cloud9 infections on systems across the globe and have linked the hackers to the Keksec malware group due to the C2 domains used. Zimperium also believes that Keksec is likely selling/renting the malware to other operators.

Report highlights insider risk is on the rise

A new report from Dtex indicates that 12% of all employees take sensitive intellectual property (IP) with them when they leave an organization. The report also suggests a 55% increase in unsanctioned application usage, which can make data exfiltration easier by allowing users to maintain clipboard history and sync data across multiple devices. The report also highlights a 200% increase in unsanctioned third-party work on corporate devices from a high prevalence of employees engaged in side gigs. These ‘side gigs’ reportedly leverage corporate data to assist third-party businesses that may be in direct competition with the employer

You should probably patch that (Patch Tuesday edition)

Additionally, Citrix issued a bulletin urging customers to install security updates for a critical authentication bypass vulnerability in Citrix ADC and Citrix Gateway. Versions of these products prior to 12.1 are not supported and therefore customers will need to upgrade to a supported version to receive security fixes.

And finally, on Tuesday, VMware released Workspace ONE Assist 22.10 (89993) for Windows customers which addresses three critical severity vulnerabilities that enable remote attackers to bypass authentication and elevate privileges to admin.

According to a new report from OpenText Security Solutions, 57% of small and medium-sized businesses (SMBs) are worried about their cybersecurity budgets being slashed due to rising inflation. The report found that, despite many SMBs having suffered a serious attack in the past, budgets are already low, with half (50%) of respondents spending less than $20,000 annually. Only 10% spend more than $50,000 per year and 68% have fewer than five security professionals on staff. That’s not great news considering nearly half (46%) of SMBs polled admitted they have suffered an attack in the past, and 60% indicated they are either not confident or only somewhat confident they could repel an attack..

The CYBER.ORG Range, a no-cost, safe, virtual environment for K-12 students to learn cybersecurity skills, will be expanded to all 50 states. The announcement came from Louisiana Governor John Bel Edwards and Cybersecurity Infrastructure Security Agency (CISA) Director Jen Easterly. CYBER.ORG was initially funded by the state of Louisiana, and is now funded by CISA’s Cybersecurity Education and Training Assistance Program (CETAP) grant. The labs in CYBER.ORG give students hands-on cyber security experiences in a safe and controlled virtual environment. The platform also helps prepare students for the CompTIA Security+ Exam, which will help lower the barrier to cybersecurity jobs.