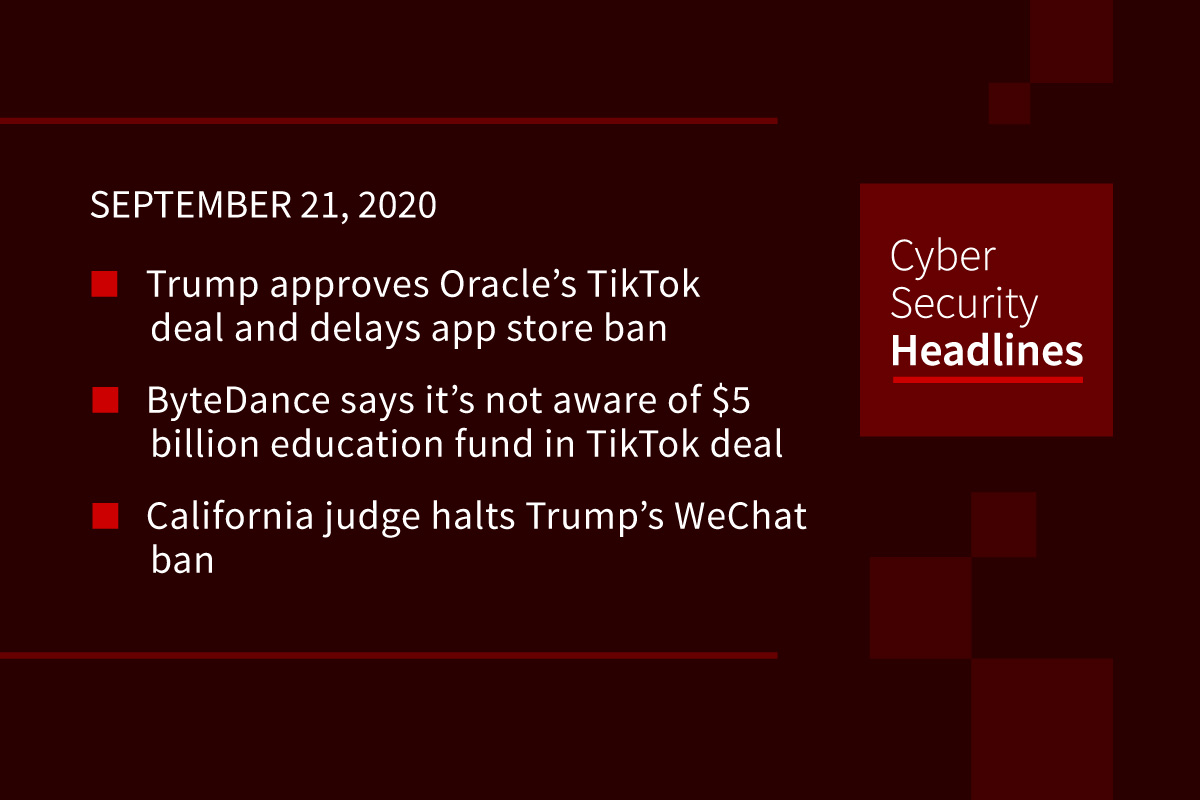 The deal involves the creation of a new company called TikTok Global and a $5 billion payment in new tax dollars to the U.S. ostensibly in the form of a new education fund. Oracle plans to take a 12.5% stake in the new company, while Walmart said it has tentatively agreed to buy 7.5%, amounting to a potential $12 billion investment. On Saturday, the Commerce department delayed by a week a ban that would have forced Apple and Alphabet’s Google to pull the TikTok video app from their U.S. app stores.

In a related story, TikTok owner ByteDance stated in a social media post on Sunday that the presidential announcement was the first time it had heard in the news that it was setting up a $5 billion education fund in the United States. In an official statement on the social media platform Toutiao, the company reiterated its commitment to investing in the education field globally including online classroom projects based on AI and video technology for students around the world.

The Trump administration’s move to ban WeChat from Apple and Google downloads has hit a legal snag. U.S. Magistrate Judge Laurel Beeler in California said in an order that WeChat users who filed a lawsuit have shown serious questions going to the merits of the First Amendment claim, which tips in their favor. The Judge’s preliminary injunction also blocked the Commerce order that would have barred other transactions with WeChat in the United States that could have degraded the site’s usability for current U.S. users. The U.S. Commerce Department and the White House did not immediately comment.

Companies turn to algorithms to decide who comes back to work

Companies like IBM and ADP are turning to decision-making algorithms to decide who should come back to work in the current situation in which full attendance is impossible. Employees in these and other companies claim to be experiencing social stigmas about not wanting to return to the workplace or being sent home after a positive test in one of their colleagues, in addition to the need for staggered arrival times, and limits on boardroom occupancy. It is hoped the algorithms will eliminate subjectivity in the decision making process.(Wall Street Journal)

IRS offers $625,000 bounty for anyone who can break Monero cryptocurrency

Monero is known as an extremely private and untraceable cryptocurrency, much more so than Bitcoin, which has made it a favorite for people wishing to keep transactions hidden from authorities. In response, the Internal Revenue Service has announced it is looking for what they call “contractors” to share a total of $625,000 if they can break Monero or similar Layer 2 off-chain cryptocurrency protocols, referring to it as a technology procurement program.

The U.S. Justice Department has indicted seven Chinese nationals for a decade-long hacking spree that targeted more than 100 high-tech and online gaming companies and involved a Chinese owned antivirus software called AnviSoft. The government alleges the individuals used malware-laced phishing emails and “supply chain” attacks to steal data from companies and their customers who would inadvertently forward the malware to their own supply chain customers. FireEye dubbed this hacking blitz “one of the broadest campaigns by a Chinese cyber espionage actor we have observed in recent years.”

The bill, which is supported by cybersecurity companies including Rapid7, BSA, Mozilla, Tenable, Cloudflare, and CTIA includes several requirements regarding oversight and standards of usage, manufacture and vulnerability monitoring, and is intended to improve the security of IoT devices in the country. All the IoT devices purchased by the Government must fulfill minimum security requirements of the bill. It must now pass the Senate.

With climate change, intensive agriculture, and the use of pesticides and fungicides in farming ravaging the world’s bees, startups are aiming to use smart technologies to monitor hive activity and send data and recommendations back to beekeepers and apiaries around the world. A number of companies have emerged to assist not only in monitoring activity but also in creating intelligent robot bees intended to use bees’ own dancing language to warn them away from dangerous areas where pesticides are being used.