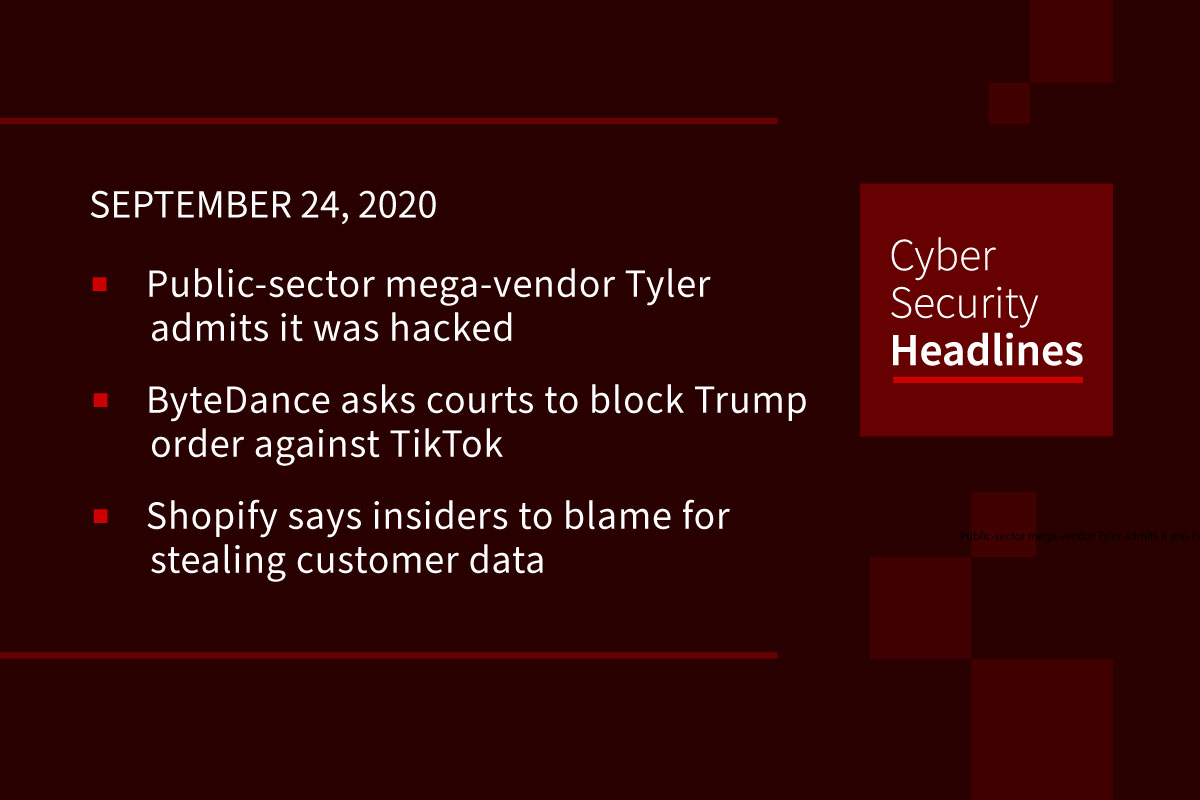 The largest provider of software and services to the public sector in the United States said on Wednesday that it was hacked by unknown assailants who accessed the company’s phone and IT systems. Tyler Technologies said it doesn’t know who the assailants are. While most consumers may not have heard of Tyler, you’ve almost certainly interacted with them: Tyler’s software supports public sector functions such as 311 systems, inspections, permitting, and utility billing. Many local governments across the U.S. use its resource planning technology as well.

Two rogue members of Canadian e-commerce giant Shopify are responsible for allegedly stealing customer names, postal addresses and order details, from what the company describes as “less than 200 merchants.” While Shopify declined to state how many merchants were affected, it did say that financial data belonging to them and their customers remained unaffected.

Experts are calling it one of the biggest takedowns of dark-web commerce to date. An international joint law enforcement action against organized crime called Operation DisrupTor has arrested 179 alleged drug traffickers and seized more than 1,000 pounds in drugs, including opioids, and millions of dollars in cash and virtual currencies. More than two-thirds of the arrests were in the U.S.

Zero trust is a big deal in enterprise security, and it’s worth $96 million to cloud-security giant CrowdStrike. The Silicon Valley cybersecurity company acquired zero-trust and identity-based, conditional-access specialists Preempt Security to bolster its threat prevention and real-time access control offerings. The deal is expected to close before the end of CrowdStrike’s fiscal third quarter.

Cybercrime and APT operations in India are on the rise

Cyber-attacks from India are on the rise, thanks to economic, political, and social factors. That’s the latest from threat research company IntSights, which says that growing economic and geopolitical tensions with China and Pakistan are fueling a spike in online narcotic sales, extortion scams, and hacktivist campaigns, as well as more sophisticated hackers-for-hire groups and advanced persistent threat actors.

LokiBot attacks have skyrocketed over the past two months, say federal and state officials. The open-source, roll-your-own malware suite targets passwords and cryptocurrency wallets on Windows computers is most often sold or traded in underground forums. Officials believe that its rise is due to how dead-easy it is to use.

Will computers be safer at Google-scale? That’s what the company is hoping for, as it adds threat detection to its Chronicle cybersecurity investigations platform. The Chronicle Detect offering uses data to protect digital assets, including analyzing data stored on third-party cloud servers.

Next article Defense in Depth: XDR: Extended Detection and Response