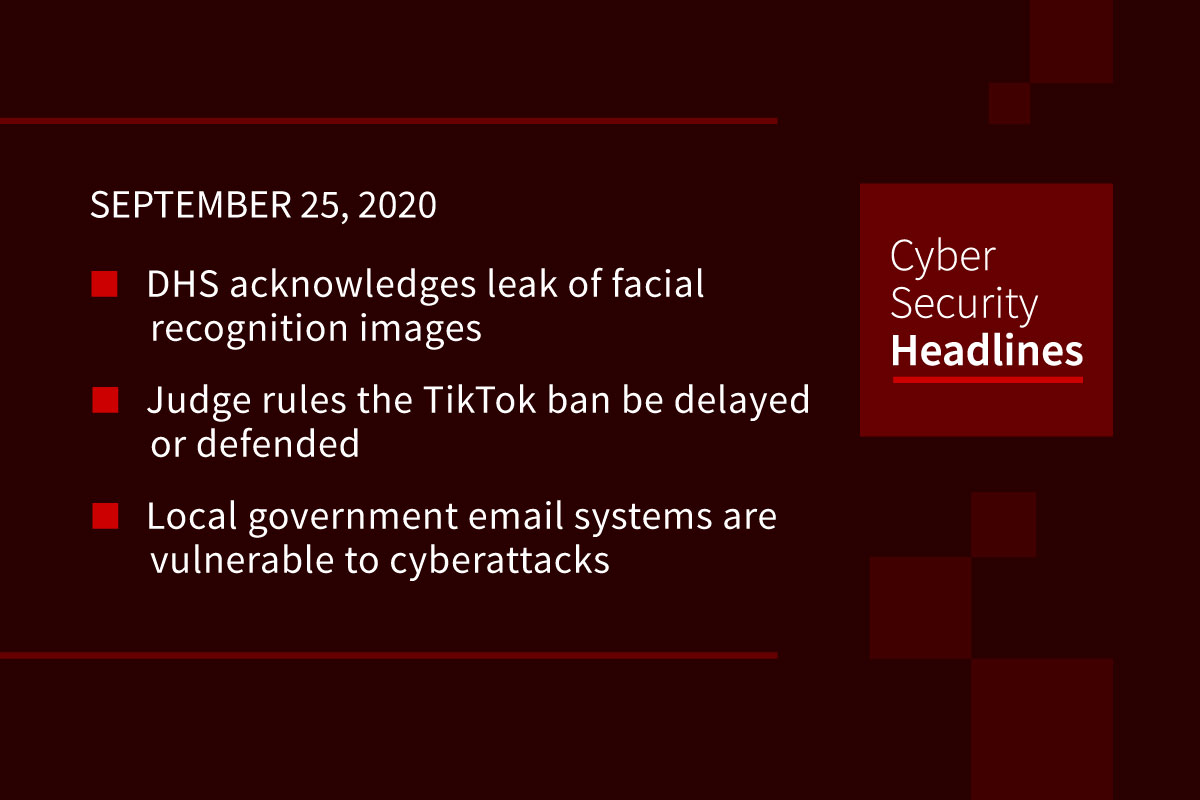 The images were part of a Department of Homeland Security facial recognition pilot project and were obtained in a hack of the Customs and Border Control subcontractor Perceptics last year. According to the DHS Office of Inspector General, 184,000 images including faces and license plate, were stolen, with at least 19 posted on the dark web. According to the report, Perceptrics transfered the images to its own network where they were not encrypted. A cyberattack against Perceptics in May 2019 obtained the images. CBP pulled Perceptics credentials and banned it from working with the DHS ever again.

Judge rules the TikTok ban be delayed or defended

The ruling comes from U.S. District Judge Carl Nichols, who said the government must file a response to a request by TikTok for a preliminary injunction or delay the order banning the app by September 25th at 2:30 p.m. EDT. The ban is currently scheduled to take place on Sunday. The government also has yet to file a legal challenge to a preliminary injunction blocking a similar Commerce Department order from taking effect on Sunday against WeChat.

Amazon said the feature was coming to its brand of home security products for free by the end of the year. Footage is encrypted on device and only decrypted with a key on a mobile device. Activating encryption will disable sharing video clips and displaying footage on smart displays. Amazon will also allow Ring owners to disable the Neighbors feed, which allows users to share video clips with other users in their vicinity.

This comes from updated figures provided on Apple’s App Store website. The company also said it rejected 1 million apps over illegal, unsafe, harmful, or objectionable content, and that the App Store receives 100,000 new apps and app update submissions a week for review.

Cobalt Strike is being used by black hats

This comes from findings by Cisco Talos, which saw the pen test tool in non-simulated attacks in everything from ransomware to state-backed APT threats. Cobalt Strike is a paid-for tool and provides  a post-exploitation agent and covert channels to emulate a quiet long-term embedded actor in a network. Cisco Talos Incident Response saw the tool in 66% of all ransomware attacks it responded to this quarter.

The security researchers at ThreatFabric discovered the malware, which it claims has stolen credentials from 226 applications, and appears to be based on source code from the Cerberus malware. Alien operates as a Malware-as-a-Service offering, designed primarily as a banking trojan, showing a fake login page to steal a user’s information. The malware has been mostly spotted trying to spoof applications used by financial institutions in Spain, Turkey, Germany, the US, Italy, and France.

The exploit was discovered by researchers at Check Point, targeting a heap overflow issue in Instagram’s image processing. Saving a maliciously crafted image to a users mobile device, would trigger the exploit the next time Instagram was opened through a memory overflow from the parsing JPEG decompression process. This would allow the attacker to get the code execution within its context and permissions, potentially allowing access to a device’s phone contacts, camera, GPS data, and files stored into the device, and at the very least completely crashing Instagram until the malicious image was deleted.

The company worked with MediaTek to develop the AZ1 Neural Edge processor, claiming that on-device speech recognition will allow for faster responses to voice queries. The chip with on-board neural engine will be available on Amazon’s newly announced Echo smart speaker and Echo Show 10 smart display. Previous Amazon smart speakers sent audio recordings and interactions to the cloud for processing. It’s unclear if the AZ1 chip will allow for offline use of the smart speakers.