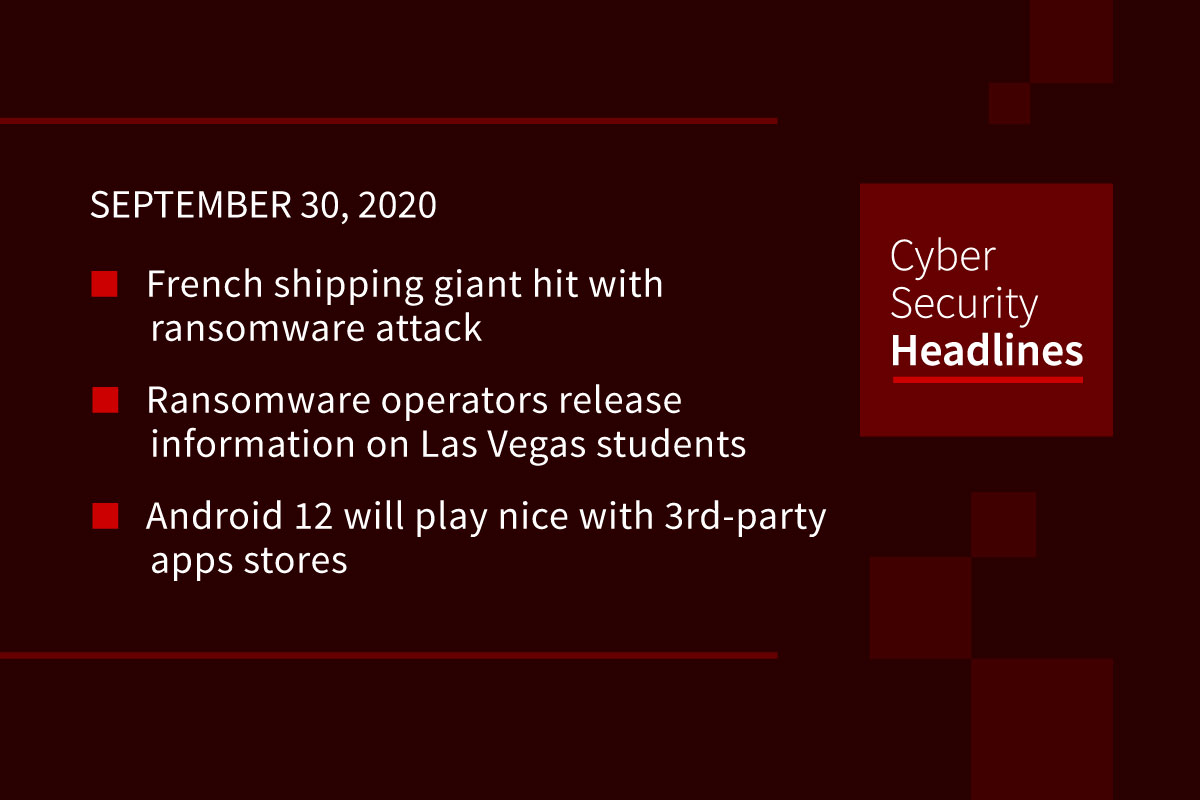 The attack impacted CMA CGM. Since 2017, the world’s four biggest maritime shipping companies have been subject to cyberattacks, with APM-Maersk taken down for weeks in the wake of NotPatya ransomware in 2017, and COSCO hit by unspecified ransomware in July 2018. CMA CGM’s branches in Shanghai, Shenzhen, and Guangzhou were hit by the Ragnar Locker ransomware. Caitlin Cimpanu at ZDNet reports that while the maritime shipping industry has focused on securing IT systems on ships, these attacks have been able to penetrate shore-based systems that sit in offices and data centers.

The move comes after the Clark County School District in Las Vegas refused to pay the operator’s demanded ransom. Documents published by the attackers included information on 320,000 students, including Social Security numbers and student grades. The ransomware attack initially hit the district on August 27th, with the district posting on social media advising there had been a cyber incident. The attackers published documents with sensitive information on September 14th to spur district administrators to pay the ransom. The Wall Street Journal reports that school districts have paid ransoms from $25,000 to over $200,000 during the COVID-19 pandemic.

The news was announced by Google, saying that it will make it easier to install and use third-party app stores on the forthcoming OS. The company did not provide any details about how this would work, but did say it is being developed “being careful not to compromise the safety measures Android has in place.” This comes as Google has emphasized that apps hosted on the Google Play Store must use Google’s Play billing for in-app transactions, which gives Google a 30% cut.

Amazon One puts payments in the palm of your hand

Amazon unveiled a new biometric technology called Amazon One that lets shoppers pay at stores by scanning the palm of their hand when they walk in the door or when they check out. The feature will initially be at the entrance of two of the company’s Amazon Go stores in Seattle, Washington, and will roll out to Amazon’s 20-plus Go stores in the future. During registration, a customer will scan their palm and insert their payment card at a terminal, then afterward all they need is their hand. Amazon hopes to sell the technology to other grocery chains.

The feature is rolling out across Facebook, Instagram, and Messenger, letting users view their settings across all the apps from a single interface. This includes toggling Single Sign On authentication, setting Stories to publish across multiple platforms at once, and later this year manage Facebook Pay settings. Account Center will also work for users who don’t use the same identity across the different platforms, including things like Pages and business accounts.

Google rolled out a password manager in Chrome in 2014, but changing passwords has always required going to passwords.google.com. Changing passwords in the browser required users to delete their old password and simply re-enter a new one. The latest beta of Chrome now includes the ability to change passwords in the browser through the Chrome settings page. Users will be able to enable and test out the feature when Chrome 86 goes stable next week.

The news comes from Cisco Talos, which saw an increase in hackers trying to exploit the elevation-of-privilege bug in the Netlogon Remote Protocol during the last week. Microsoft issued a patch last month that addresses the security issue in Active Directory domains and trusts, but a full mitigation for third-party devices requires domain controllers to enable “enforcement mode,” something Microsoft will enable by default in February 2021.

McAfee files for an IPO

The security firm is looking to raise funds on an $8 billion valuation. The move could see Intel fully divest itself from the company, after acquiring them in 2010 for $7.7 billion. Intel eventually spun out the company and sold a 51% stake in McAfee to TPG Capital back in 2017. Regulatory filings show that in 2019, McAfee saw revenue increase 9.4% on the year to $2.64 billion.

The chips are designed for industrial and automotive use cases, and include the high performance Arm Cortex-A78AE CPU, with an accompanying Mali GPU and image signal processor. These chips include new safety features to double check each calculation on the silicon. Rather than a traditional “locked” mode, where cores on a chip are paired to run the same calculations for redundancy, these chips operate in a hybrid mode, where the individual cores run in split modes, but the shared cluster logic that integrates the cores runs in a locked mode. Arm claims these chips will work for high performance use cases where medium failure detection is needed.