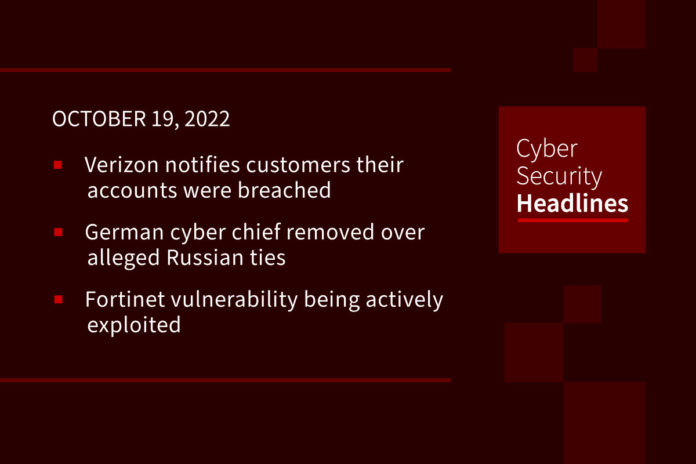 This week, Verizon warned an undisclosed number of customers  that, between October 6 and October 10, 2022, a hacker gained access to their accounts and may have processed unauthorized SIM card changes. Verizon indicated that the threat actor may have also accessed customer names, telephone numbers, billing addresses, price plans, and other service-related information. The company says they’ve reset account PINs and reversed any unauthorized account changes. At least one customer reported that they believe their crypto account was accessed using details exposed during the Verizon breach.

On Tuesday, Germany’s top cybersecurity chief, Arne Schönbohm, was removed from his post after a hit comedy TV show highlighted his ties to Russian intelligence. The German satirical news show, ZDF Magazin Royale, alleges that Schönbohm co-founded and stayed in contact with a lobbying group that included a Russian cybersecurity firm founded by a Russian intelligence agent. A German Interior Ministry spokeswoman said that the news has “permanently damaged the necessary public trust in the neutrality and impartiality.” Schönbohm had led the Federal Office for Information Security since 2016.

Last week on Cyber Security Headlines, we covered a Fortinet zero-day critical authentication bypass vulnerability tracked as CVE-2022-40684. Fortinet confirmed that the bug is now being actively exploited in the wild. At least 17,000 FortiOS (7.0.0 to 7.0.6 and from 7.2.0 to 7.2.1) and FortiProxy (7.0.0 to 7.0.6 and 7.2.0) devices remain exposed online and vulnerable. Customers should upgrade their systems as soon as possible or, if they are unable to upgrade, should disable the HTTP/HTTPS administrative interface or limit IP addresses that can reach it.

European police have arrested 31 suspects for their alleged participation in a sophisticated plot to steal connected vehicles. Car thieves targeted two unnamed French car manufacturers, using a tool marketed as an ‘automotive diagnostic solution’ to replace legitimate software loaded onto vehicles. This software enabled them to open the doors and start the ignition without needing to use the key fob. Evidence suggests that the hacking tool in question was being sold to third parties online. Authorities seized more than €1m in criminal assets and arrested not only some of the suspected car thieves but also the suspected malware developers and resellers.

Thanks to today’s episode sponsor, SafeBase

A new report from Ernst & Young has revealed that while most US employees understand their employers cybersecurity protocols, Gen Z and millennial workers are least likely to prioritize or adhere to them.  Roughly half of Gen Z (48%) and about one-third of millennial employees (39%) admit to taking cybersecurity protection on their personal devices more seriously than on their work devices, potentially putting companies at risk. Gen Z and millennial workers are also more likely than older generations to use the same password for both a professional and personal accounts and to accept web browser cookies on their work-issued devices.

Microsoft is working on a fix for a known issue that might prevent customers from configuring Exchange Online mailboxes in Outlook for Windows. These configuration problems stem from Autodiscover flow 603 errors which occur during the Outlook Connectivity test. The known issue affects several Outlook desktop clients including Outlook for Microsoft 365, Outlook 2021, Outlook 2019, and Outlook 2016. Admins can fix the issue by following manual steps published by Microsoft while they wait on a patch.

A new report from CDK Global revealed that fifteen percent of car dealers experienced a cybersecurity incident in the past year. Of these, a whopping 85% of incidents were caused by phishing attacks that resulted in data breaches, IT-related business interruptions and loss of revenue. The study found that only 37% of auto retailers are confident in their current cybersecurity protection, representing a 21% drop in preparedness from last year’s study. The report also found nearly 60% of dealers plan to prioritize investments in cybersecurity infrastructure, hiring cybersecurity experts, and providing cybersecurity training to their staff.

Apple has restored Russian social network VKontatke and webmail provider Mail.Ru to the App Store, three weeks after removing them both for sanctions violations. The two Russian home-grown services serve as alternatives to Facebook and Gmail with domestic market share to match. The apps were removed from Apple’s platforms in late September, following a wave of British sanctions targeting the financial organisations that own them. Censorship critics are condemning Apple for its “erratic and non-transparent” management of App Store content.