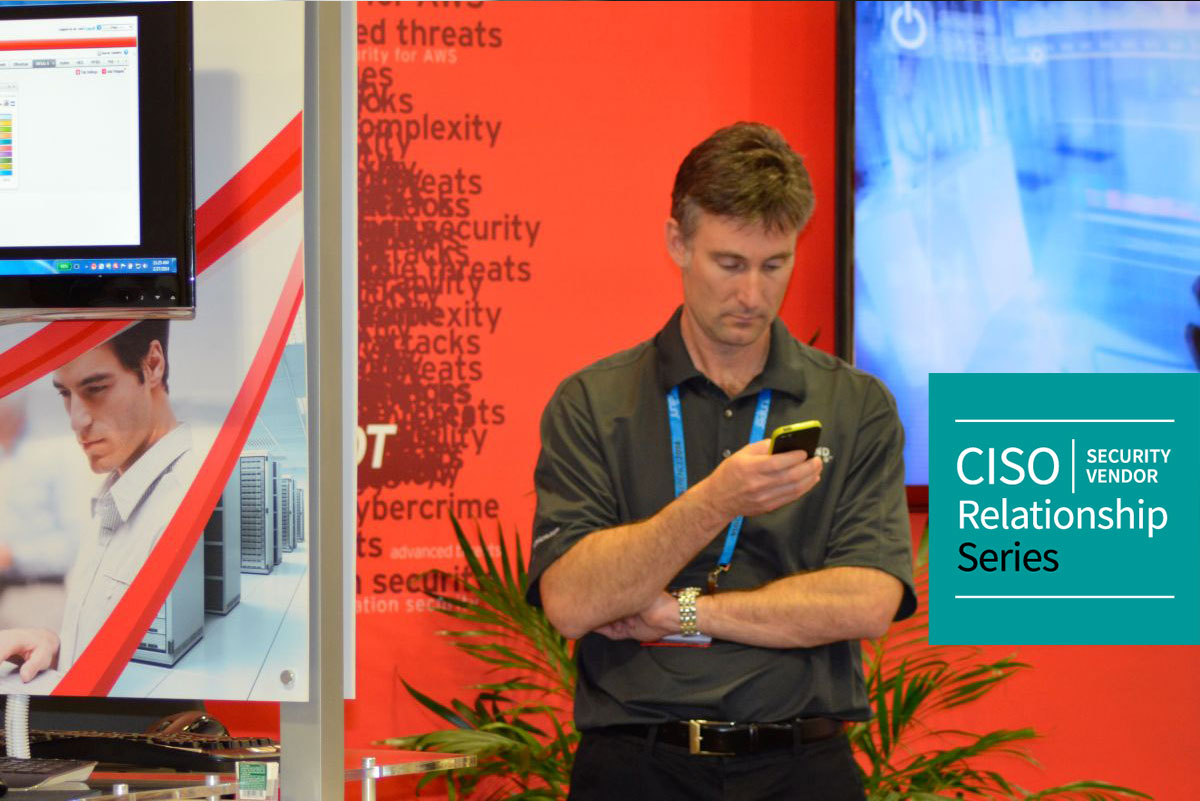 Every year I go to the RSA Conference, the trade show floor gets bigger, the attempts to attract people through gimmicks gets more intense, and many staff members working the booth could not look more bored. They’re sending the wrong signal to attendees and it’s hurting their brand.

These photos, taken at previous RSA events, are just a small sample of what I see again and again at trade shows, most notably RSA.

If you’re working a booth at a trade show, any show, keep the following in mind:

NO ONE is stopping in your booth because of your spectacular booth design.

EVERYONE is looking at the people in the booth and are open to being engaged on issues they care about.

You are ON DISPLAY for the length the trade show floor is open. If you exhibit any of these “I’m not interested in you, I’d rather be staring at my phone” behaviors, then attendees will immediately pass judgement on you and pass you by.

NO ONE is eager to talk to someone staring at their phone.

NO ONE is eager to talk to someone whose back is turned to the floor.

NO ONE feels comfortable breaking up to a huddle of coworkers talking to each other and ignoring attendees.

Put some effort into your approach

The opening line of “May I scan you?” or even worse, just walking up to someone and scanning them, is the equivalent of saying, “May I have your name, title, company, email address, and phone number?” as an OPENING LINE!

At one point on the floor, in just the span of three minutes, I had three booth staff members try to stop me with the completely uninspired, “How you doing?” How much less effort could they possibly put into this?

Many of the companies I spoke with on the trade show floor were questioning their investment in their booth. They were frustrated with the minimum $50K (cost of booth, travel, people, etc.) they had to spend and didn’t feel they were getting the results.

Attendees don’t magically approach you. You need to make the first move.

The lack of having an opening line is not isolated to just the RSA Conference. I’ve seen this problem again and again. Many companies spend fortunes on their booth, yet don’t spend a few minutes to come up with an opening line. Here’s a video I produced a few years ago at a trade show about trade shows, and many of the booth operators, who should know better, had not planned an opening line.

Yes, you may have intelligent and friendly booth staff, but most people have a mental block on how to approach a complete stranger and start an engaged conversation. You and your staff need to prepare opening lines. Before you go to the show, write a few out and after the end of every day, share which lines you think worked the best.

The show is about the attendees, not you

Here’s an opening line I recommend, that works in every situation.

What’s the coolest thing you’ve seen or heard at the show today?

If you ask this question, you’re initiating a discussion on the attendees’ interests, not yours.

By letting them talk about what interests them first, you get to quickly see if they would be qualified for your solution or not.

If they’re not qualified, you have an opportunity to tell them what you do and your value proposition, so when they talk to someone else later who happens to mention they’re interested in your services (which is extremely likely), they’ll remember the positive engagement they had with you.

Qualified or not, you’re trapped in a booth and have little visibility as to what’s going on at the show. Each person walking by is an information source as to the best information happening at the show. Stop and ask as many people as possible and you’ll soon be the most educated person at the show.

This straightforward book offers suggestions and techniques on how to stop and engage trade show attendees to quickly figure out if they’re qualified or not qualified for your product. If you find yourself stumbling as to what you should do or say at a trade show to attract more people, read this simple 100-page book.

Compared to the minimum $50,000 trade show exhibitors find themselves spending, the book’s cost ($14.99 (print), $9.99 (digital)) is probably the lowest risk and highest ROI trade show investment you can make.